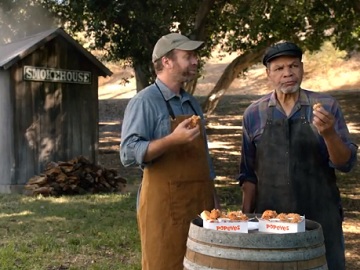 Popeyes Louisiana Kitchen promotes, in a new ad, its new $5 Smokehouse Boneless Wings deal, which will be available
at participating locations nationwide through November 2017.

The spot highlights that you get 6 boneless wings, one signature side of your choice, a buttermilk biscuit and new
Rajin’ Cajun BBQ Ranch Sauce for dipping. The lady introducing the Smokehouse Boneless Wings, for which she took inspiration from Cajun Smokehouse, also invites viewers to order the Cajun style turkey today.

Popeyes has also added to its menu, for a limited-time, as well, the new Caramel Apple Pie, which features a cinnamon pie filling and caramel loaded inside of a crispy, deep-fried turnover-style pie crust outer shell.

Among the other new additions to the brand’s menu there are also the Pound Popcorn Chicken and Cajun Loaded Fries with Cajun Gravy. However, they have been available for a limited-time only, until October 29.