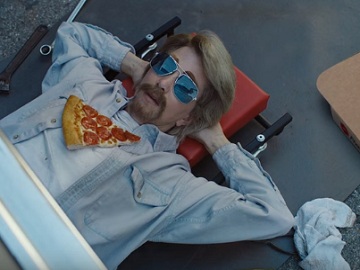 The 43-year-old actress and comedian, known for her work on the NBC sketch comedy series Saturday Night Live and such films as Bridesmaids, The Martian, and Ghostbusters, introduces herself as “The Everyman” and appears as men, women, and even a child. “There are certain things every man wants. Like oven-hot Pizza Hut pizza. I should know. I’m The Everyman. Well, not technically every man. But I’m every man, woman, and child in America.

And I want my pizza fast. And I want my pizza oven-hot. So Pizza Hut is promising every one of me exactly what I want. That’s why their stores are hiring a bunch of new delivery drivers. And they’ve got smarter computers to tell me when my pizza will arrive. Because Pizza Hut promises to always deliver what I want: oven-hot pizza, fast every time.” – says Wiig, who’s wearing lots of wigs in the spot to impersonate various characters, from a man repairing his car, a farmer, to a businesswoman.

The spot ends with Wiig, playing a guy at a prom, dancing with a girl and telling her the restaurant chain’s tagline, “That’s why no one OutPizzas the Hut”.