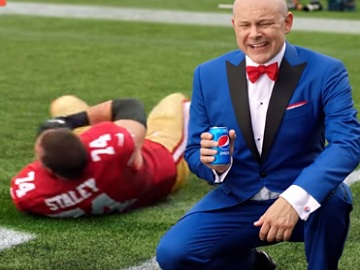 The 30-second spot, titled “Joe Staley’s Dream”, features the San Francisco 49ers offensive lineman in the end zone, doing his touchdown celebration dance, which consists of running in circles on the ground and worming his way out, Corddry, holding a Pepsi can, says to the camera: “New celebration rules are in place and Pepsi is all for it.

So what’s big man Joe Staley doing? He’s celebrating a touchdown he didn’t score. The sad truth is the odds of a guy like Joe scoring a real touchdown are the same as zero.” “But it’s fun to dream, isn’t it? Even if those dreams are delusional.” – he asks at the end of the spot, telling then Joe “there’s no “i” in impossible” and adding, to the camera, “there is, there’s two”.

“The Fun Doesn’t End Zone” campaign also features Antonio Brown, Anthony Barr, Sterling Shepard, Dak Prescott, Amari Cooper, Joe Flacco, Aaron Donald, Gerald McCoy, Devonta Freeman, Jarvis Landry and many more, who show off their dance moves, as well, and gave “crazy answers” to “crazy questions”, “only real fans are crazy enough to ask”, such as “What is the funniest place you took a selfie?”, “Describe yourself in three emojis”. They also shared their thoughts on whether “Aliens Exist” and chose between “a pet unicorn or a pet dragon”.