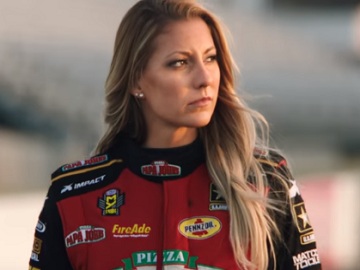 “Ever since I was a young girl, I dreamed of racing against the pros, so I kept pushing to be better and never let my foot off the gas. That drive caught the attention of someone who strives for better just like me.” – says, in the 30-second spot, the 29-year-old 11000HP Top Fuel Drag Racer, currently driving an NHRA Top Fuel dragster for Don Schumacher Racing, referring to Papa John’s, that has become her primary sponsor.

The TV spot is accompanied by a new national pizza box featuring Leah Pritchett and her gold Papa John’s dragster alongside Papa John and his prized 1971 Camaro Z28.

Previous: Scotiabank Commercial: Everyone’s Different
Next: Volvo XC90 Commercial: The Most Awarded SUV of the Century