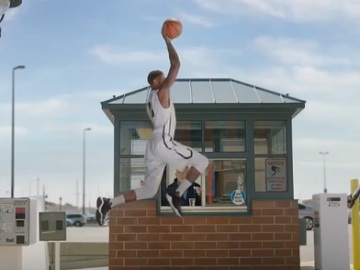 Burgers and fries should look out because a new “power couple” is here: bacon cheddarburger and pizza. Papa John’s introduces Bacon Cheddarburger Pizza with dill pickles, hickory smoked bacon and zesty burger sauce, at only $10, and has released a dedicated commercial to promote this deal.

The 30-second spot features Pacers All-Star Paul George who’s about to slam dunk, but, hearing about the Bacon Cheddarburger Pizza, flies away to Papa John’s to have one, while his thoughts are revealed: “I love that zesty burger sauce and the hickory smoked bacon and pickles covered in melty cheddar”. Inside the restaurant, Papa John, who’s handing him the Bacon Cheddarburger Pizza, says that “When you love better ingredients like we do, you go the distance”.

The spot ends with the voiceover urging you to get the new pizza on pan or large crust for only $10 and with Papa John saying the brand’s tagline, “Better ingredients. Better pizza”.