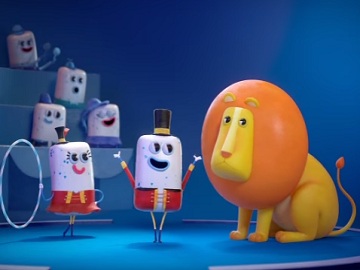 Orbit continues its “Time to Shine” ad campaign with a series of new spots, promoting the Orbit White soft chews.

The 10-second ad titled “Vespa”, features two Orbit White soft chews that form a couple, riding a blue vespa on a highway. The lady chew, with a blue scarf blowing in the wind and a bow in her hair, holding onto her lover, closes her eyes delighted, while he utters a smile. Above them, on the clear sky, the writing “Irresistibly fresh” appears.

The spot ends with the tagline “Bigger flavor. Softer chew”.

The cute Orbit White soft chews brought to life in the brand’s spots are shown, in another spot, sitting on a bench, initially with their eyes glued to their phones, but falling for each other instantly when they see each other. A plane flying above them carries a flag with the message “Instant Attraction”. In a third spot, a lion at the circus starts chewing an Orbit White soft chew that puts its head into the lion’s mouth.