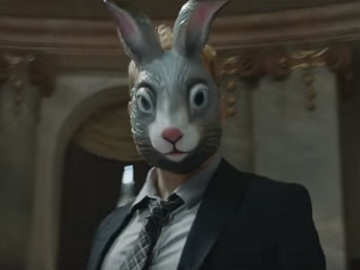 Orbit has launched a new commercial, urging viewers to Grab a piece of Orbit Gum and steal the moment.

The 15-second spot, titled “Robbery”, begins with a guy wearing a rabbit mask robbing a bank and continues with a client laid on the floor, who slowly moves his hand toward his pocket. The young woman next to him is looking at him in suspense, imagining, perhaps, that he will take out a gun, but he is actually grabbing a piece of Orbit Gum and then asks her what she’s doing after “this”, making her smile.

The brand of sugarless chewing gum from the Wrigley Company has released also other hilarious spots, with the tagline “Time to Shine”, encouraging viewers to make their first impression a lasting impression with Orbit Gum and stay cool under pressure with Orbit Gum.