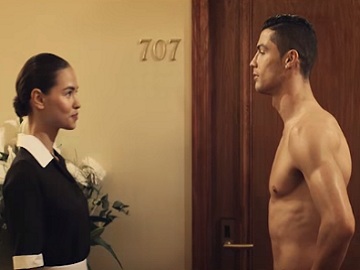 How fast can a pic of Cristiano Ronaldo in his underwear go viral? Really fast, according to the latest ad launched by American cable television provider/multiple system operator based in New York City Optimum.

The 15-second spot features the Real Madrid star locked out of a hotel room. This wouldn’t be a great deal, but he’s wearing only a pair of skimpy boxer shorts. The maid coming to open the door for him takes a photo and posts it on social media. The image goes viral and gets thousands of likes, obviously.

The famous football player has posted on his Twitter account a photo of him in underwear, in front of the hotel room, along with the message “Getting a bit to much exposure” and a laughing smiley. He is no stranger to showing off his toned body in underwear as he served as a model for his underwear collections, dubbed CR7 by Cristiano Ronaldo.

Optimum highlights you can shop online for great web only deals, during its Red Hot Sale. For $69.99/month, you can get 200Mbs Internet, Multi-Room DVR Plus for 2 years, HBO SHOWTIME for 1 year, and, if you order online, you can get Free Installation and a $200 Reward Card with an upgraded TV package.