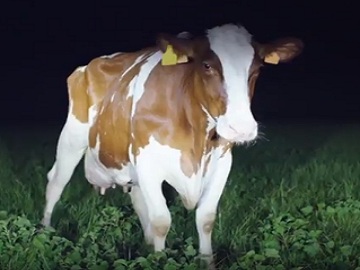 Opel has launched a new ad campaign to show off the new Grandland X and some of its most important features.

One of the commercials, spotlighting the SUV’s modern AFL (Adaptive Forward Lighting) headlights, begins with a middle-aged man in his car, filmed in profile, asking in a furious voice “Where you were last night?”. When no answer is heard, he shouts “Tell me” and turns on the AFL headlights, which immediately light up the view, revealing that the man was talking to the cow standing in front of the car, that he thought he had lost. “Ha, I knew it.” – the man adds and starts laughing out loud after hearing the cow bellowing.

The spot ends with the voiceover saying “The Grandland X with extra-bright LED headlights” and with Opel’s tagline, “The future is everyone’s”.

According to the automaker, the AFL (Adaptive Forward Lighting) headlights, “intended to help drivers observe objects earlier than they otherwise would when entering a dark corner, are part of an already innovative design that makes the Grandland X a bold SUV”.

Previous: McDonald’s Gladiators Advert – The Italian Stack
Next: eBay Commercial – Don’t Shop Like Everybody Else