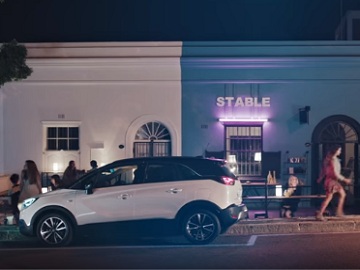 Opel has launched a series of new ads showcasing the new Crossland X and some of its most important features, such as the OnStar’s Personal Assistant, OnStar’s Crash Response, the 180° Rear View Camera, the extra big 1255 litre boot, and the Automatic Emergency Braking.

The spot “dedicated” to the 180° Rear View Camera features a teenage girl telling her parents, after having gotten in the backseat, that she forgot her handbag. Unfortunately for her, her parents’ Crossland X is equipped with a 180° Rear View Camera, which enables them to have a panoramic view on everything behind the car and around the corners, including the place she went to look for her handbag. Thus, they caught her lying: she hadn’t forgotten her handbag, she just went around the corner to make out with her new boyfriend.

When the girl gets back in the car says her handbag was right there where she left it and her father cannot help but ask “Aha, good kisser, your handbag?”, which makes his wife burst into laughter.

The spot ends with the voiceover introducing the new Opel Crossland X with a 180° Rear View Camera that can even
see around corners and saying the campaign tagline, “It’s a good life”, while in the background Tom Gaebel’s song
“It’s A Good Life” can be heard.