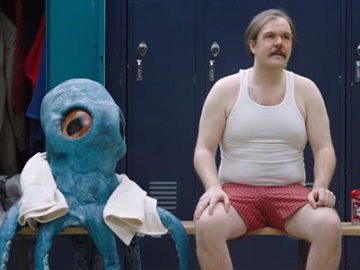 Old Spice promotes its deodorant and body wash from the Krakengard Wild Collection in a 60-second commercial, titled “Squid Cop”.

The ad stars Max Crandall as Todd Braddick, veteran detective in the Fulton County PD, who is partnered up with a blue jumbo squid. The two are shown patrolling the streets, getting to know each other, interrogating suspects, using Old Spice Krakengard Body Wash and Dedorant in the locker room, where they become the butt of jokes (“Do you want some lemon for that calamari?”) and helping each other in moments of crisis; well, the squid helps Braddick by untying his hands, which makes the latter reveal “Never thought I’d tell you this, but sometimes I wish I was a squid, too”.

The spot ends with Braddick having a phone conversation with his partner, telling him “So I’m putting on deodorant, and there you are, right on the case. You’re everywhere, man!”.

The voiceover states that Squid Cop is a Krakengard production and that this film has not yet been rated or filmed.
In order to promote its new products, the brand has teamed up with a Brazilian robotics company to create an incredibly life-like squid, which has been remotely controlled by Twitch users during the event S.Q.U.I.D. or Shared Quests Uniting Individual Dudes, that went live on May 19, 20 and 21 from 4 p.m. to 9 p.m. EDT each day.