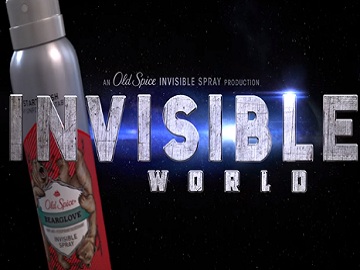 Old Spice promotes the feature-length, invisible movie titled “Invisible World”, described as “a piece of movie-making history” and “the invisible movie of the century”, with a 30-second trailer/commercial, done by Wieden & Kennedy Portland agency.

“Inside our world lies a hidden, invisible world, featuring everything you’ve ever wanted to see in a movie. But you won’t. Because you can’t. Because… it’s invisible.” – the narrator says in the 30-second trailer, which includes an alien growl, screams of terror, alien laugh, and screams of terror again, without showing anything on the screen.

“Invisible World. Don’t not see it.” – the voiceover adds at the end of the spot, while an Old Spice Invisible Spray is seen across the screen, spraying.

Old Spice invites people to join the brand for a one-off screening of the movie at Hollywood Theatre, Portland, on Thursday, August 24, at 2pm. Entry is free and the first come, first serve rule will apply, while space lasts.