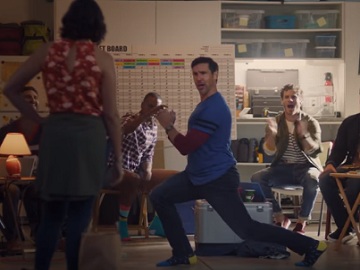 The 30-second spot features a young woman returning home and finding her husband in the garage, pulling his pants up while his friends were applauding. Soon, she finds out that he traded his draft pick (Le’Veon Bell) for Old Navy jeans because they have Built-In Flex and, as a guy in there says, “a quality player for a quality jean”. Her husband then tries to convince her that he did a good thing by showing off the moves he can bust while wearing those jeans.

The commercial highlights that the men’s jeans with Built-In Flex are available from $29 until September 20th.