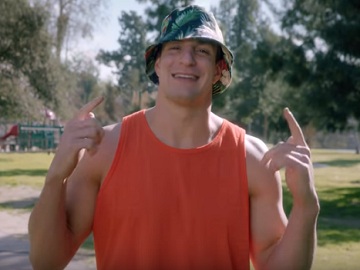 Rob Gronkowski found the perfect gift for his dad on Father’s Day: a tie. Not a “regular” tie, though, but one made out of beef jerky. Obviously, this is not real news, it’s just the script of the Father’s Day ad released by Oberto Beef Jerky.

The spot, introducing a series of “Father’s Day Moments with Rob Gronkowski”, features the New England Patriots tight end preparing the unconventional gift for his dad, to whom he writes a message, as well. “Dear dad, you’ve been my greatest inspiration and my biggest supporter, which is why this Father’s Day I’m giving you the best gift you’ll receive from any of your sons, especially Glenn. Of course I’m talking about a jerky tie, made from 100% all-natural Oberto Beef Jerky.” – says Gronk, justifying that a jerky tie will satisfy his dad’s need “for that famous Gronkowski style and hunger, in the same time”. “I hope you’ll think of me every time you’ll wear it. Love, Rob” – concludes Gronk his greeting, chewing a piece of the jerky tie.

The spot ends with the image of the jerky tie and the message “Happy Father’s Day”.

This is not the first collaboration between Gronkowski and the beef jerky brand. Last year, he starred in several other commercials, alongside Seattle Seahawks shutdown corner Richard Sherman, goofing around, talking and eating beef jerky. The NFL star has endorsement deals in place with other brands, as well, including Nike, Monster Energy, BodyArmor, Dunkin’ Donuts and Hudson Jeans.