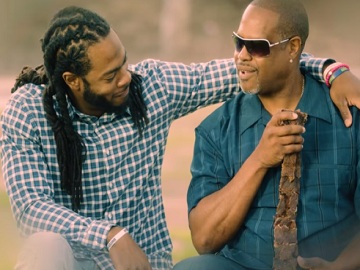 Richard Sherman is back on the small screen, in a new commercial for Oberto Beef Jerky, released for Father’s Day.

The Seattle Seahawks shutdown corner stars alongside his father, Kevin, about whom he says he’s the man who taught him how to catch a ball and catch a bitch, and “the man who is always, always there”. He says that, this Father’s Day, he’s going to let his “pap” know how much he appreciates him by giving him “the greatest gift of all”: “a jerky tie, made of 100% all-natural infertile beef jerky”, which is “light weight, stylish, and goes with everything”.

The father-son duo is shown on a bench, in a park, with the jerky tie.
The spot, part of a dedicated campaign, titled “Father’s Day Moments”, ends with the greeting “Happy Father’s Day”.
Sherman starred in other Oberto Beef Jerky commercials last year, together with New England Patriots tight end Rob Gronkowski.

If you’re planning to buy a jerky tie for your dad this Father’s Day, please be informed that Oberto doesn’t actually sell jerky ties. However, the brand did offer some instructions for how to make your own. Called “Gronk & Sherm Do-It-Yourself Jerky Tie”, the “manual” includes five steps that you have to follows in order to have the jerky tie ready, after buying the Oberto Beef Jerky.