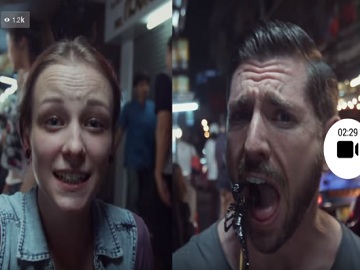 Nokia has released a series of new ads, promoting its Nokia 8 with Dual-Sight camera and aiming to highlight that
it’s more intereresting if you share the both sides of the story.

The five spots, 15-second each, have in common a split screen, with the person making the video on one side and the filmed person on the other side.

One spot, titled “Scorpion”, shows a young woman who gives a cooked scorpion to her boyfriend, and the latter tasting it. In “Baby Steps” we can see a mom recording her son’s first steps. A friendly monkey stars in the third spot, and the other two ads feature a puppy given as a present to a little boy and a grandpa receiving a cake at his birthday party.