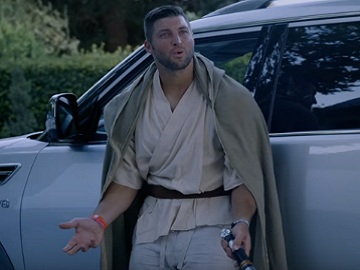 The 40-second spot features the former Heisman Trophy winner and NFL quarterback, who is currently an outfielder for New York Mets, dressed as a Jedi from Star Wars in front of the Heisman House, standing near a Nissan Armada and waiting for his fellows to get out of the house and go to a Halloween party. The Heismans show up one by one wearing a different version of a Tim Tebow costume. While some of them are wearing Broncos Jets and Patriots uniforms, one of them is wearing the full Tebow Florida Gators uniform, and the former quarterback Danny Wuerffel appears in a muscle suit and claims to be dressed as Tebow with his shirt off. Finally, former Alabama running back Derrick Henry shows up dressed in a baseball uniform meant to mimic that of Tebow’s first professional baseball team, the Columbia Fireflies, to deliver the punchline. “Let me guess, you are me also?” – Tebow asks. “No, I’m a baseball player.” – Henry answers, making the others laugh.

“Get in the car!” – Tebow says to his mates, adding “You all know imitation is the highest form of flattery, right?” The spot ends with an onscreen line urging you to visit NissanHeismanHouse.com for a chance to win a Nissan Titan.