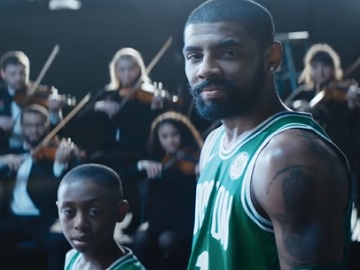 Kyrie Irving stars in a hilarious new commercial for Nike, together with Rob Gronkowski, Jason Tatum, and the Boston Symphony Orchestra, to promote his signature sneaker, Kyrie 4.

The 90-second spot, including Irving memes of this year, opens with the Boston Celtics’ star trying to shoot a video, with Gronkowski serving as a voiceover. “Knowing neither the enemy, nor yourself, you will succumb in every battle.” – the latter is heard reciting from Sun Tzu’s “The Art of War”, while on screen a close-up of a serious Irving is seen. He wants to stop filming, though, because he’s “not feeling” it, leaving Gronk behind asking “Am I too serious?”. Irving goes on to play a mixtape called “Kyries’s Groove”, shows viewers his world (a globe that is extremely flat) and then his shoes, the Kyrie 4, while levitating. He asks Jason Tatum, who’s nearby eating popcorn, what he thinks about those sneakers, and the latter answers they’re “cool”.

Finally, Irving presents his body-double (played by a kid) and the Boston Symphony Orchestra, which plays while he’s showing off his jogging skills and shoots a basket. “Let’s see that backwards.” – he says and, after all these scenes are seen backwards, Gronkowski asks him how he did that. Irving’s answer is “Simple, plant-based diet”.

The commercial ends with the tagline “Find Your Groove”, Nike logo and Irving logo.

Previous: Teletext Holidays TV Advert 2018
Next: Experian Meet Your Data Self Advert – Dan and His Data Self