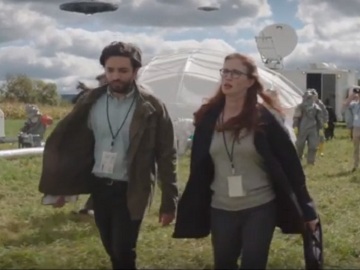 The New York Lottery invites people to go for the win in its latest commercial, promoting the 1 in 9 odds of its daily draw game, Take 5.

The 60-second spot, created by McCann New York and titled “UFO”, features a team of specialists trying to fend off an alien invasion. They have seemingly tried to communicate with the aliens, but “it’s not going well”, as one of them says. The lights, the sounds, the cryptologist – all of these have been used, but with no success. When the mother ship shows up, one of the specialists tells her teammate that “the odds of this ending well aren’t looking good” and suggests to go play Take 5 from New York Lottery instead, arguing they have a 1 in 9 chance of winning. The guy agrees, so they both leave, while behind them other persons are abducted by aliens.

The New York Lottery’s campaign for Take 5 also includes another spot, featuring a group of medieval knights in a forest who choose to play the Take 5 game instead of facing the enemy, given the fact that they have a one in nine chance of winning.