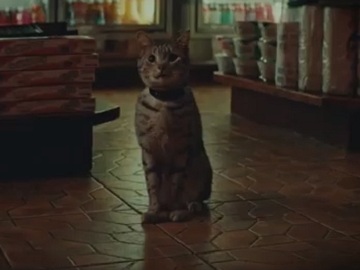 The animal, named Cyrus, found shelter in a penny bridge store where the seller is a kind middle-aged man. The night of Christmas Eve, he decides to make a surprise to the man and go at his house to put a lottery ticket in his stocking. In order to do this, Cyrus takes the bus, walks a lot through the city covered in snow, and goes up the fire escape to finally throw himself down the chimney and get into his friend’s house and leave the Christmas gift.

The song playing in the background is the 2012 single “How Sweet It Is” by Julia Stone.