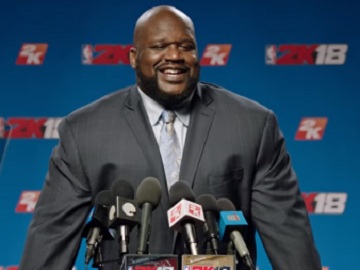 The spot features Shaq, who has been announced as the cover athlete for the NBA 2K18, during a press conference, giving a thank you speech, in which he mentions his parents, whom he appreciates for their “guidance, love and support”, his coaches, “both college and professional”, and… “most of all, Kobe Bryant”. Why he would thank Bryant? Because he has just started reading from a teleprompter on which the text is being typed by the formed NBA star.

O’Neal keeps reading, unaware – yet – of what is happening: “He was an NBA 2K Legend cover athlete first. He’s so awesome and handsome and has really nice natural teeth.” At this point, he stops, saying “Wait, what?”, while Bryant is shown in a corner of the room, at the laptop where he’s been writing the statements, showing off his
white shinning teeth. But “this isn’t over”. Shaq informs his “enemy”, at the end of the spot, that “payback’s going to be fun”.