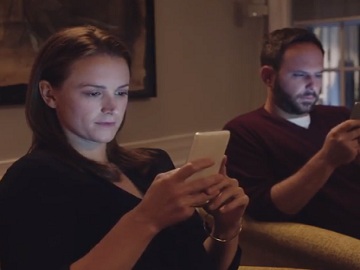 “Nature’s Bounty Lutein Blue helps protect eyes from damaging blue light, filtering it out to help you continue enjoying your screens.” – the voiceover says at the beginning of the 30-second spot, titled “Couch”, which features four friends, most probably two couples, who sit all together in a living room but, instead of talking to each other, are glued to their smartphones. “Or… you could just put your phones down and talk to each other. Why don’t you try a puzzle? That’s a good group activity. Something… fun.” – the voiceover adds, while the “protagonists” are still focusing on their devices. Eventually, after the voiceover stops talking, one of them looks around him and says “Puzzle”.

The commercial ends with the voiceover saying the tagline “Nature’s Bounty Lutein Blue – Because you’re better off healthy”.