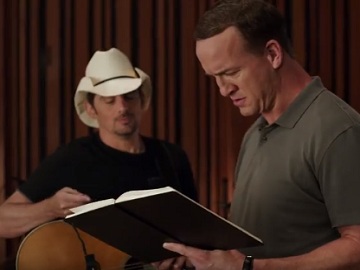 The former football quarterback, who took on the title of Paisley’s jingle coach a while back, is seen trying to help Paisley with his new Nationwide song about retirement planning by writing some lyrics of his own. “I wrote you some lyrics.” – he tells the country singer, who’s asking, in response, a little bit surprised: “You’re writing now?”. As Manning is holding his notebook open so that he could see the lyrics, Paisley begins using them in a song: “Here’s a man like you and me, retired after eighteen years of qb.” He says the song might seem about him and, when Manning asks “which part”, he says that “all of it”.

Text across the screen highlights, at the end of the spot, that “Nationwide is on your side” with retirement plans, investments, and more.

Manning, who became a Nationwide spokesman in 2014, and Paisley, who became the voice of the Nationwide insurance jingle in 2016, have co-starred in several other spots included in The Jingle Sessions.