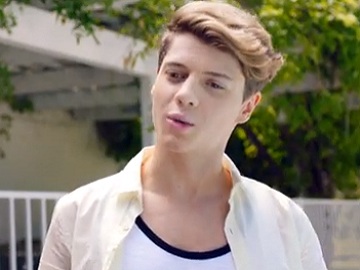 Jace Norman teaches kids how to Make Safe Happen when they are around the pool in the latest Natiowide commercial,
part of a major campaign called Make Safe Happen, providing safety tips by child’s age, location and risk category.

The 30-second spot features the 17-year-old actor, known for his role as Henry Hart/Kid Danger in the Nickelodeon’s Henry Danger TV show, reminding a kid by the pool to follow a series of important rules when going for a swim, such as “Always walk near the waters edge”, “Ask an adult if it’s safe to jump in”, and “Always swim with an adult nearby”.

Norman, who’s joined by the plastic safety guy who happens to be a huge fan of safety, says – at the end of the spot – that “Together we can Make Safe Happen”.

The Make Safe Happen campaign has been launched because of the worrying statistics related to kids drowning, which reveal that “Drowning is the #1 cause of injury-related death in kids under 4 (according to the CDC)” and that “During the summer in the U.S., a child drowns every 5 days in a portable pool”.