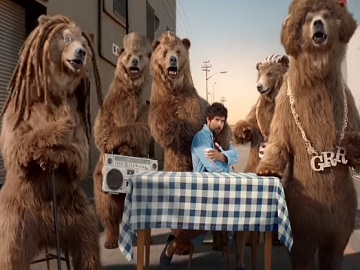 “The 5 Grains Crew”, consisting of five bears named after the grains included in the new rice pot, is seen dancing and singing a rap song, each of them sporting a different fur/hair style, from high fade to treadlocks. Finally, they are seen standing near a guy who tries the Müller Rice 5 Grains at a table, outdoor.

The song used in the ad is the 1995 single “I Got 5 On It” by American hip hop duo Luniz, from their debut album, “Operation Stackola”.

Müller Rice 5 Grains, launched on September 25, comes in Original and Blueberry varieties and is sold in single packs of 180g as well as packs of 4.