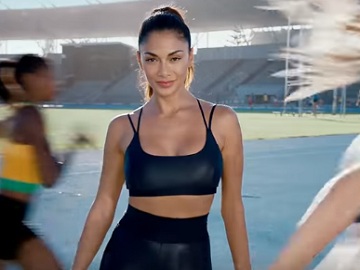 Nicole Scherzinger stars in a new ad for Müller, promoting the brand’s Limited Edition Corner yogurt and promotion that gives viewers the chance to win athletics tickets or prizes with promotional Müller products.

The 30-second spot, aiming to inspire more young people to get into and enjoy athletics on (and off) the track, features the 39-year-old American artist showcasing her curves in a black sport outfit while running, jumping and squatting at an athletics track. Holding a box of Müller “delicious, creamy” yogurt Corner Gold Edition, she also talks about the brand’s promotion in the process. “Win Athletic Tickets or Prizes to London 2017 with special packs. One pot = One entry. And you can be there, too.” – says Scherzinger, who manages to put some yogurt on her nose and asks a group of guys running at the track if “anybody wants some”.

At the beginning of June, Müller announced their Limited Edition flavour launches, for Müller Rice, which includes Chocolate & Caramel flavour and Banana & Toffee flavour multipack, for Müllerlight fat free yogurt, which includes “Summer Inspired” Apple & Elderflower flavour Elderflower flavour and “Summer Inspired” multipack, and for Müller Corner, the yogurt with a little something extra on the side, including Raspberry Compote and Apple & Pear Compote.