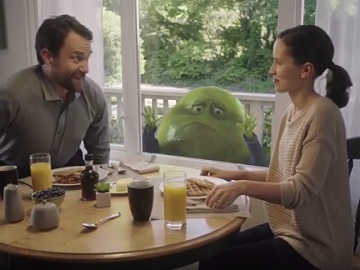 Mucinex urges you to keep your cough from coming back, pointing out, in one of its latest ads, that, while some
cough medicines only last four hours, one Maximum Strength Mucinex DM lasts 12 hours.

The 30-second spot, titled “Night Cough”, features a young couple in their bed, at night, before going to sleep. When the man coughs, his wife tells him that that cough doesn’t sound so good. At this point point, the Mucus Man shows up holding a pillow, saying that he thinks it sounds great. The woman advises her husband to take Mucinex DM and the Mucus Man says he will text him in four hours, when the cough returns.

“One pill lasts 12 hours, so…”, “Looks like I’m good all night.” – the couple answer to the Mucus Man, who is then chased out of the room.

The next morning, the man takes a seat at the table, to have breakfast together with his wife, to whom he tells he’s still not coughing. The Mucus Man, showing up at the window, shouts “Not fair, you guys, waffles are my favorite”.

“Why take 4-hour cough medicine? Just one Mucinex lasts 12 hours. Start the relief. Ditch the misery. Let’s end this.” – the voiceover says at the end of the commercial.