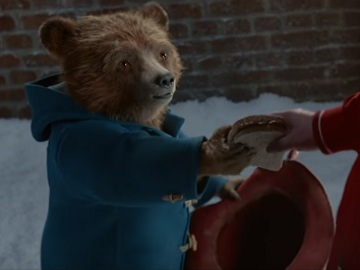 M&S has unveiled its Christmas advert, starring Paddington, the iconic bear that returns this week on the silver screen in the highly-anticipated sequel Paddington 2.

The spot, directed by Daniel Kleinman, features the furry character mistaking a burglar for Santa on Christmas Eve. Seeing his red outfit and sack full of presents (apparently), he rifles through the sack and says he knows all the kids whose names are names are on the gift tags. He then embarks on a mission to help Santa put the presents under the Christmas trees in those kids’ homes, without imagining – in his innocence – that they were putting them back where they were stolen from.

As the spot comes to an end, we see the burglar, played by actor Mark Benton, watching a little girl unwrapping her gift and finding the sparkly superhero outfit she had wanted. Paddington then pulls out of his red had a marmalade sandwich that he gives to the fake Santa, now almost in tears.

The end of the advert, already known by viewers, since it was released as a teaser, features news reader Angela Rippon announcing breaking news of how Santa was caught on video in London with a bear and Paddington being approached by a bunch of journalists at his home.

The advert, that will premiere on Tuesday, November 7, on ITV, during the ad break in The Mirror’s Pride of Britain awards ceremony, will also run in cinemas, in the “gold” slot before the movie.