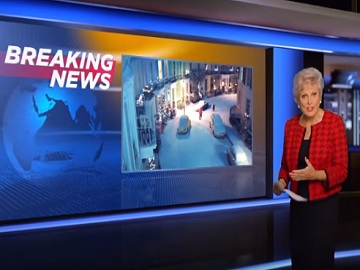 The evergreen broadcaster (best known for reading BBC One’s Nine O’Clock News for almost twenty years and now for presenting Rip-Off Britain) is seen in a TV studio announcing viewers that “Santa was caught on video in London late last night. Not with an elf, but with a bear…” Footage images feature a chubby man walking on the streets covered in snow in the company of a bear that seems to be Paddington.

The 10-second teaser also reveals that the full advert will be released on November 7.

This year’s campaign ties in, therefore, with the launch of the film Paddington 2, scheduled for November 10 (in the UK). The upcoming CGI animated adventure comedy film, directed by Paul King and starring Julie Walters, Jim Broadbent and Hugh Grant, follows the Peruvian bear, who’s now settled with the Brown family, as he embarks on a quest to find the gift he bought for his Aunt Lucy and that got stolen.

In 2016, the British multinational retailer presented Mrs Claus (played by Janet McTeer) as the new Christmas icon in its commercial, directed by Tom Hooper, who saves the day for a little boy.