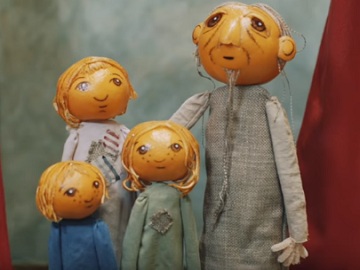 “Why do we find an orange in our Christmas stocking?” – this is the question posed by Morrisons in their latest Christmas advert.

The British supermarket chain gives us the answer in the 60-second spot featuring a traveling puppet theater that uses painted oranges as puppets.

“Once upon a time, there was an old man with three daughters and they were terribly poor. Even though Christmas was coming, the daughters had to go to work for there was no money in the house. On Christmas Eve, the girls went to sleep and during the night, a kind stranger who’d heard about the family dropped three gold coins down the chimney, where the girls’ socks were hanging by the fire to dry. The coins fel in the socks and in the morning, when the children pulled them on, each one found a small piece of gold nestled at the bottom. Instead of working over Christmas, the children were able to spend time together. And who was the kind gentleman who left the coins? Why, Father Christmas of course. And to remind us of those twinkling coins, he now leaves a golden orange instead.” – the narrators says.

The spot is part of Morrisons’ initiative of reviving this almost forgotten tradition of putting oranges into Christmas stockings, initiative which also includes handouts of 200.000 oranges to parents across the country.