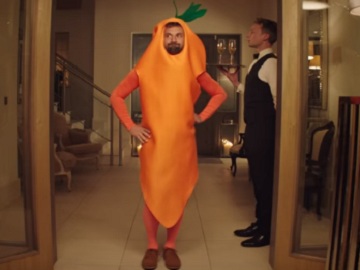 The 30-second spot, dubbed “Everyday”, features Sophie, a young woman who’s ordering from Moonpig original gifts for her boyfriend on various occasions. To celebrate their anniversary, she has Grow It Funky Veg box, including costumes that make them seem vegetables, which they wear on a date in a fancy restaurant. Her boyfriend, Tom, is also shown tasting her father’s “4 amazing beers” that he found “hard to swallow” and wearing a personalised apron featuring the text “Tom King of Cakes”, after he made, for a little girl, a birthday cake in the shape of a bunny that didn’t look well at all.

The advert ends with the voiceover urging viewers to go to Moonpig for gifts and cards that mean more and adding the company’s tagline, “share a moment, share a moonpig”.