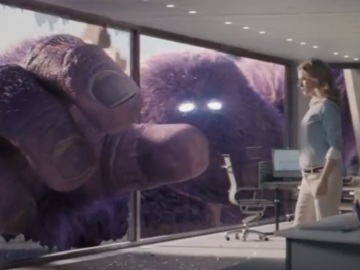 Monster UK has launched a new advert, highlighting that Monster helps you get the job you deserve and inviting you to download the job search app.

The spot, available as 6-second blast, 30-second pre-roll, and 60-second version, features the mascot of the UK-based employment website, a huge purple furry monster named Monster, grabbing a young woman from her workplace, where she must deal with a bad boss, and taking her to another company, where she deserves to be. Monster’s journey through the city, with the woman in his right hand, is shown, with him stumping along the streets, trying to squeeze in between two buildings and damaging fire escapes in the process, crossing railroad tracks and avoiding being hit by a train, and finally smashing a window of an office building to leave the woman at her new desk.

The advert, soundtracked by jazz music, ends with the woman looking with gratitude to the Monster, who helped her
start a new chapter in her life, in a company that seems just what she needed.