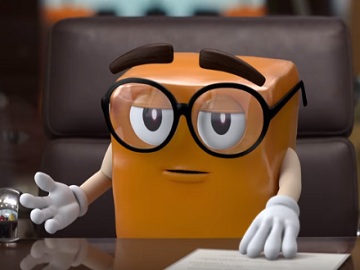 “Caramel has been square for far too long.” – states M&M’S in its latest commercial, released to promote the New Caramel M&M’S.

The 30-second spot, titled “Group Talk”, features the M&M’S candies in a conference room, where the interviews for the spokesperson position have been held, talking about one of the candidates.

“Do we really have to choose him to be our next spokesperson?”, asks Red.
“Seems like a good fit”, says Ms. Brown.
“But it’s so boring”, gives Blue his feedback, while writing a text on his smartphone.
“I’m yawning just talking about it”, says Red actually yawning.
“Well, it’s our job to change that”, states Green.

At this point, Orange jumps into the conversation saying, a little bit worried, and pointing to the chair in front of them: “Guys, I think he can hear us”.

As the filming angle changes, viewers get to see who the M&M’S candies were talking about: Caramel.

“Hm, sounds like you’re on the fence.”, says Caramel, rubbing his temple, asking then “Why don’t I just leave you my resume?” and adding “Yes, it’s laminated”.

While Red answers, crossing his arms, “No, thanks”, Yellow shouts, raising his hand, “You’re hired!”.

The commercial ends with the voiceover saying that “Caramel has been square for far too long” and introducing New Caramel M&M’S.