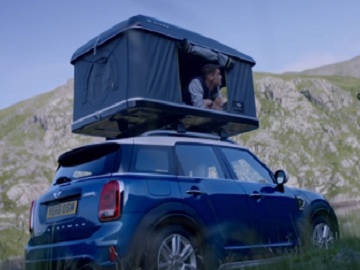 MINI Countryman and Visit England, along with Visit Wales, have teamed up to bring you a getaway like no other in the Room with a View campaign.

The 50-second spot released to promote this initiative features award-winning adventure photographer Finn Beales as he travels exclusive locations in the UK, including Snowdonia, Durdle Door and Cheddar Gorge, and staying in a room with a view, which is actually a roof tent on top of a MINI Countryman. “Who’s into escaping the city? To a new kind of getaway. Add space. Add breathtaking views. Add three exclusive locations. Add generous living space. Add home comforts. Add a garden. Add a bath. Add breakfast included. We’re adding stories. Who’s in?” – this is the message conveyed by the automaker, inviting people to visit its website for a chance to stay in the MINI Countryman in those stunning locations.

Beales, who has been the MINI Countryman’s first guest, has spent the night at Durdle Door with his son, Harland.

During such a “staycation”, you could sleep on top of the MINI Countryman in a specifically designed roof tent, so that you could enjoy views as much as possible and be protected, at the same time, by various elements.