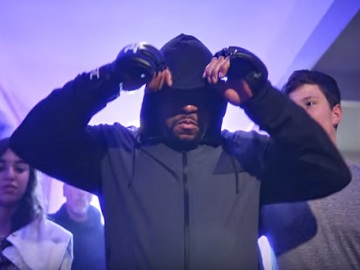 MetroPCS has launched a new ad campaign, highlighting that the company brings you #CloserThanEver to the UFC, on a 4G LTE network that is more reliable than ever.

One of the 30-second spots, titled “Walkout”, aiming to show what can happen when MetroPCS brings the UFC “closer than ever” to the fans, features a mother in the kitchen, with her husband watching UFC on his smartphone, calling her kids to come to dinner. At this point, they show up on the hallway around UFC light heavyweight champion Daniel Cormier, who’s wearing his gloves and his hoodie on, as if he were ready to walk into the octagon, with a walkout song playing in the background. When he puts off his hood, revealing his identity and a “ready-to-fight” look, the woman says “Guys, I said no gloves at the table.” Her husband, who’s looking with admiration toward Cormier, realizes that he must back her up, so he asks the kids to listen to their mother.

One of the most highly-anticipated events of the year, UFC 213: Nunes vs. Shevchenko 2, will be taking place on Saturday, July 8, in Las Vegas. MetroPCS, the exclusive wireless partner of UFC, has brought in also UFC flyweight champion Demetrious Johnson and UFC lightweight Sage Northcutt to star in a spot.