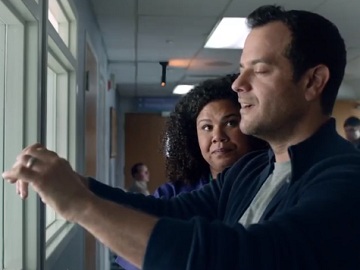 MetroPCS continues its #CloserThanEver ad campaign with a new hilarious spot, featuring a man who can’t stop looking at UFC not even in one of the most important moments in his life.

The ad begins with a new-born baby boy in his crib in the hospital nursery, while in the background his dad’s voice
is heard saying “That’s my boy. That’s my boy Cody.”. When the man is shown, he can be seen holding his smartphone as if he was making a video of the infant. A nurse passing by stops, in fact, near him for a moment, intended to congratulate him after he finishes filming, but she soon realizes his speech doesn’t refer to the baby, as he’s commenting the UFC game he’s watching on the smartphone. “So good. Look at that hair. Look at the chin on this kid. So tough.” – the man also says, making the nurse grumbling “I guess I’ve seen it all”.

The 30-second spot ends with the voiceover saying that “MetroPCS brings you #CloserThanEver to the UFC. Anytime, anywhere, and with no limits.” and urging you to “Get 4 lines of Unlimited LTE Data for $100 period.”, before adding the company’s tagline, “Wireless Figured Out”.