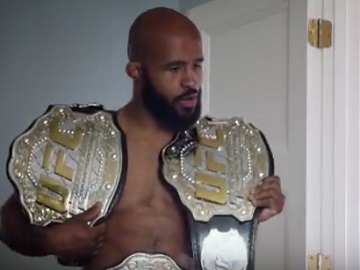 The 15-second spot, titled “Belt”, features a couple in their bedroom, with the guy asking his wife if she has seen his belt.

The latter, who’s watching Johnson on her smartphone, answers she hasn’t seen it and tells him to check the bottom drawer, though. While her husband is doing this, the MMA champion shows up, carrying his three belts and gives one to the man looking for his belt. “I’m gonna need that back.” – the “Mighty Mouse” says, adding “Don’t lose it.” while heading out. “There’s no way I’m giving this back.” – the man tells his wife, wearing already the new “glossy” accessory.

The spot ends with the voiceover urging you to “Get closer than ever to the UFC on the network covering 99% of people in the U.S.” and adding the company’s tagline, “Wireless Figured Out”.

Demetrious Johnson, who is the first, current, and the only Flyweight Champion of the UFC (Ultimate Fighting Championship) to date, has been called by various UFC personnel “one of the greatest mixed martial artists in the world”.

MetroPCS’ CloserThanEver campaign, in partnership with WBAB, gave people the chance to meet the UFC fighters, at select MetroPCS location. From July 19th to July 21st, Stipe Miocic, Stephen “Wonderboy” Thompson, and Joanna Jedrzejcyk had encounters with fans. Moreover, the company created a broadcast-quality pre-game show where fans can watch their favorite fighters give fight analysis, predictions, and respond to fan questions live from their phone. The Facebook live show includes demonstrations and fight strategies by UFC fighters.