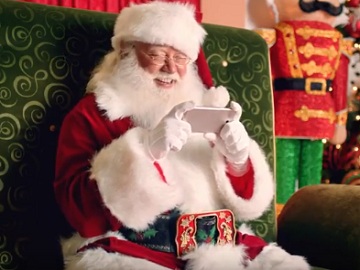 MetroPCS promotes its Black Friday Deal, that includes Amazon Prime on them for a whole year, a free Samsung Galaxy J7 Prime, plus 4 lines with unlimited LTE data for $100, in a hilarious new commercial.

The 30-second spot features lots of parents waiting in line with their kids in a mall to go to Santa, who’s sitting in an armchair, but doesn’t interact with any kid, though. One of the moms there, whose son was supposed to be taken over by Santa, asks a woman dressed as an elf that’s the holdup and she’s informed that he switched to MetroPCS and got Amazon Prime plus a free phone with an unlimited plan and now he’s watching tons of movies. “What about the kids?” – the mother asks, referring to all the kids waiting in line for hours to get the chance to talk to him. “Amazon Prime has tons of kids movies, too.” – the elf answers. “Oh, you meant, these kids. They’re gonna be waiting a while.” – she adds, while Santa is seen laughing out loud watching The Thick (the Amazon comedy series based on the character The Tick from the comic book of the same name) on his new smartphone.

At the end of the commercial, the voiceover mentions that you could get this great deal, too, and urges you to “switch now and get Amazon Prime on MetroPCS for a whole year with a free Samsung Galaxy J7 Prime plus four line with unlimited data for only $100.”