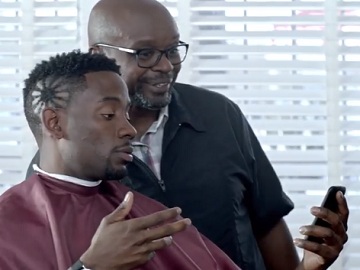 MetroPCS continues its ad campaign, promoting its 4G LTE Network, described as “more reliable than ever”, with
a new hilarious commercial.

The 30-second spot, titled “Is Your Network Not Cutting It?” features a guy at the barber shop, asking the barber if he can get a certain haircut which he shows to him on his phone. “Say no more”, answers the barber getting to work. Seeing the result (a “loading” sign on the side of his head), the man utters a “Whaaat?” because that was not what he had wanted. “But it looks the same, look at that!” – says the barber, delighted by the result.

“CJ’s Sprint network wasn’t cutting” – states the voiceover, referring to the unlucky guy, and adding “that’s why he switched to MetroPCS because he figured out he gets a network that’s more reliable than ever, with faster 4G LTE speeds than Sprint”.

The spot ends with the voiceover urging you to “switch now and get two lines for only $50 period plus two free Samsung Galaxy phones (when you switch)” and saying the company’s tagline, “Wireless Figured Out”.