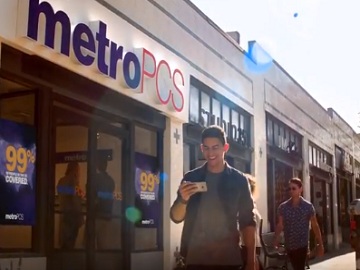 MetroPCS has released a new commercial, urging viewers to get coverage “that rocks” with MetroPCS.

The 30-second spot features a young couple about to enter the venue, where a member of the staff asks them to show him their tickets. While the girl hands over the print ticket, the guy shows his smartphone, saying that his ticket is right there. When he’s told that “there’s nothing”, he answers that it’s loading and that “it takes a little bit”. However, this doesn’t help him get to the concert and, eventually, realizing that his network’s coverage “was a no-show”, switches to MetroPCS “because he figured out he gets a network that’s more reliable than ever, covering 99% of people in the U.S.” (according to the voiceover).

The spot ends with the voiceover urging you to “switch now and get two lines for $50 period plus two free Samsung Galaxy phones” when you switch.