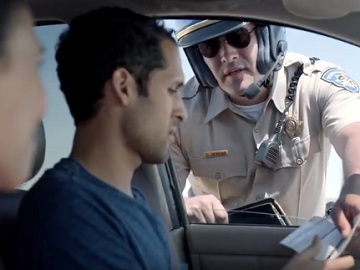 The 30-second spot features Cindy and Mike, a couple in their car who realized they had a speed problem with their network after the highway patrol stopped them. “I didn’t know I was going so fast.” – the guy tells his wife, who agrees that it’s was hard to tell all the way out there, in the middle of nowhere. Right after he is handed over a speed ticket by the police officer, she – who reveals to be a Sprint customer – receives a notification from the app she’s using on the road, informing her that police is reported ahead. “Now they tell us.” – she says disappointed, adding “Well, let’s go. Slowly, like your network”.

The voiceover then reveals that this is the reason the couple switched to MetroPCS. “Because they figured out they get four lines with unlimited high-speed data for only $100 period.” – the voiceover says, mentioning that “that means no more data caps. Plus four free phones of their choice from great brands.” Finally, he also says the company’s tagline, “Wireless Figured Out”.