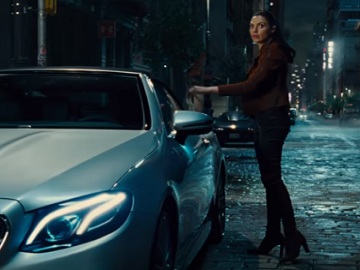 “You’d think that if you can fly, travel at lightning speed, and control the ocean, automotive transportation wouldn’t really be top of mind, right? Think again.” – this is the idea behind the latest Mercedes-Benz commercial.

The car manufacturer invites you to see the Mercedes-Benz E-Class Cabriolet and Mercedes-Benz AMG Vision Gran Turismo in the upcoming superhero film Justice League, coming to theaters this November.

The 30-second spot, titled “Hard to Resist”, features the Justice League heroes and some of the scenes in which the brand’s vehicles are used. “They can fly, travel at the speed of light, and command the currents. They don’t need another way to get around. Or do they?” – the voiceover asks, while on screen Gal Gadot is shown getting out of a Mercedes-Benz and driving another model.