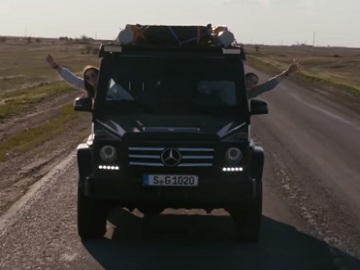 Mercedes-Benz showcases its G-Class vehicles in a new commercial, highlighting that every G-Class tells its own story.

“There is a car that is stronger than others. A car made of stories. Stories that are stronger than time. Every G-Class tells a different story.” – the voiceover says in the 30-second spot, which features a Mercedes-Benz G500 in various places around the world, on all kind of roads, from rocky ones to snowy ones, and also footage of an old version of this SUV.

The voiceover then urges viewers to share their personal experiences and adventures in the G-Class on social media, using the hashtag #strongerthantime, or on the brand’s Facebook page.