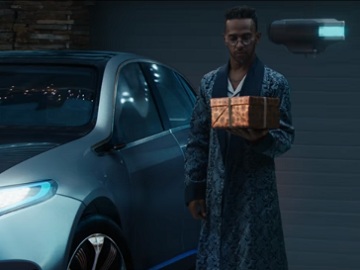 Mercedes-Benz has launched a short Christmas film, aiming to highlight that Christmas isn’t the only thing just around the corner, the future is too.

The film, titled “Future Traditions”, features a young man spending Christmas day with his family and contemplating at this holiday. “Christmas. Every year, always the same.” – the man’s thoughts are expressed by a voiceover, who also lists the ingredients that make Christmas traditions a challenge for the protagonist, including “the good old tree”, “the beast” (that is actually the family’s dog, who “unwraps” gifts placed under the tree in his way, obviously), “the power nap” of his grandmother, the photo shoot where he must say “cheese”, the “talent show”, the presents, and the games. And that’s not all. Just at the emotional peak, uncle Bob shows up, kissing him on his forehead and handing him a Christmas card. At this point, it is revealed that the film is not set in 2017, but in 2038. As he’s standing at the main door and looks outside, the man sees a neighbor (played by Lewis Hamilton, who’s sporting make-up that makes him look 30 years older), near his all-electric, autonomously driving Mercedes-Benz EQ model, sending a gift through a drone. On the street, a dog is walked by a drone, as well, and volocopters are seen flying. “Crazy world. I need a drink.” – he thinks and goes inside, closing the door behind him, which in turns out is decorated with a Christmas wreath in the shape of the Mercedes-Benz logo.

The film ends with the onscreen lines “A lot will change in the future. Except Christmas. The future is on its way.
The all-new EQC”.