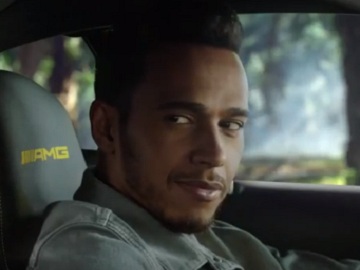 Lewis Hamilton drives the new Mercedes-AMG GT R on one of the world’s most iconic race circuits, the Nürburgring Nordschleife, also known as “Green Hell”, in the automotive brand’s commercial titled “Beast of the Green Hell”.

The 90-second spot features the Formula 1 world champion taming “The Beast”, an AMG green hell mango model, on the race track, which is presented as the car’s “natural environment”. After showing off his impressive driving skills, he comes to an abrupt stop, and it is revealed that he is in the pit lane. A few seconds later, he presses the start/stop button and disappears into the jungle again.

The spot, set to the rhythms of Linkin Park’s “Papercut” from their 2001 album “Hybrid Theory”, ends with Hamilton leaving a restaurant in the city in the company of a beautiful young woman. As they get into the AMG, he utters a smile.

The brand’s ad campaign for the new AMG GT R, developed and realised by STAUD STUDIOS, debuted in June 2016, to mark the world premiere of the sports car on 24 June in Brooklands, UK at the Goodwood Festival of Speed, and includes various photos and films. It can be seen on the digital platforms of Mercedes-AMG, Mercedes-Benz, MERCEDES AMG PETRONAS Formula 1, Lewis Hamilton and Linkin Park.