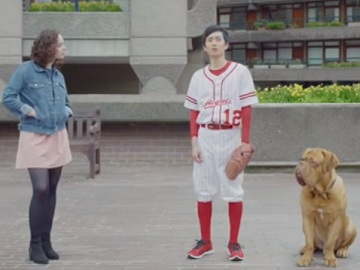 The Great Tastes of America menu returns to McDonald’s UK and the fast-food restaurant chain celebrates it with two new ads created in collaboration with Leo Burnett London.

One of the 30-second spots, aiming to promote the New York Stack, features the conversation between two youngsters who are about to have lunch.

“What are you thinking for lunch?”, asks the girl, holding her hands in the jacket pockets.

“McDonald’s”, answers the guy she’s asked. “I fancied that New York Stack”, he adds, listing then the ingredients, when the girl asks for details. As he mentions what the New York burger contains, he turns into a baseball player.

The girl, who turns into a baseball player, as well, agrees to try it out, so they both head to McDonald’s to have the New York Stack, with the dog, wearing baseball gear, following them.

The advert ends with the voiceover saying that Great Tastes of America is back at McDonald’s, and urging you to go now for the New York Stack, served in a sesame bagel, which will be available until 16th of May.