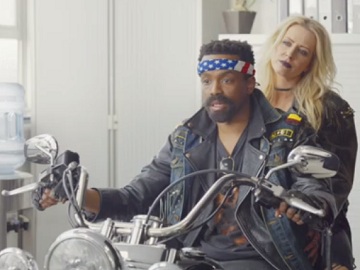 McDonald’s UK continues its “Great Tastes of America” campaign with a new advert, promoting one of the brand new burgers, the Tennesse Stack, in the menu from June 14 to June 27.

The 30-second spot features two guys at the office, wearing formal clothing, talking about lunch. Asked where he’s going for lunch, one of them answers that he’s going to McDonald’s to have a Tennesse Stack. As he lists the ingredients (two beef burgers, smerky cheese, bacon, grilled onions, and Tennessee smoky barbecue sauce), he turns into a motorcyclist that has also a blonde woman in the backseat. “Comin’?” – he asks his coworker, who’s also a motorcyclist, with an eagle sitting on the handlebar.

The spot ends with the voiceover announcing that Great Tastes of America is back at McDonald’s and urging you to go now for the Tennesse Stack, which will be around until 27th of June.