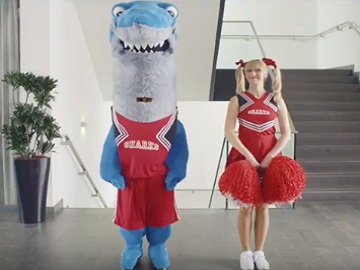 McDonald’s UK marks the “return” of the Great Tastes of America menu with a series of new adverts created by agency Leo Burnett London, promoting the already known New York Stack and the new Louisiana Stack.

The 30-second spot titled “Louisiana Stack” features two women wearing business attire, in an office building, during the lunch break, having a conversation which ends with them transformed.

“You’re heading for lunch?”, aks one of them, with brown curly hair, and shorter than the other, revealing a British accent.

“Yeaaah”, answer the other, who has blonde straight hair, mentioning that she’s going to McDonald’s to try the
Louisiana Stack. When the first lady asks “what’s that”, she starts listing the burger’s ingredients and, as she does that, she turns into a cheerleader for the English professional rugby union club that plays in the English Premiership Sale Sharks. The other woman turns into a mascot for the club.

The advert ends with the voiceover saying that Great Tastes of America is back at McDonald’s, and urging you to go now for the Louisiana Stack. This burger, including two beef burgers Pepper Jack cheese red & yellow peppers, cool mayo and spicy ketchup, is new to the menu, alongside the South Carolina burger and the Spicy Nacho Cheese Wedges.

The Great Tastes of America menu includes also The New York Stack in a sesame seed bagel, and The Tennessee Stack with smoky BBQ sauce, which are known by the customers of fast-food restaurant chain since the previous years. Each of the four burgers will be available for just two weeks.