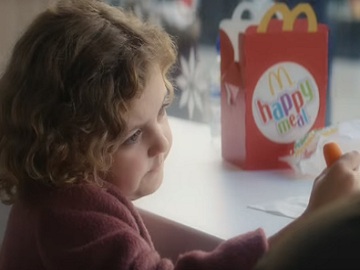 McDonald’s UK Christmas campaign is a reminder for parents that the fast-food restaurant chain enables them to choose carrot sticks instead of French fries as part of its flagship Happy Meals, while telling the heartwarming story of a little girl eager to give a little something also to Santa’s reindeer and her dad, who helps her make her wish come true.

The 90-second spot, created by Leo Burnett London, features a little curly-haired girl who has lunch with her dad at McDonald’s on Christmas Eve and decides to keep the carrot stick from her Happy Meal for the reindeer. She is seen holding on to it for the rest of the day, everywhere she went, and telling everyone that “it’s for the reindeer”. Arriving at home, in the evening, after a long shopping day and exhausting ride by bus for her, she excitedly runs towards her mom to let her know, as well, about her intention of giving Santa’s reindeer her carrot stick. Her older brother then intervenes, with a question that will change the course of the night: “Do you know there’s more than one, right?”.

The next scene features the man at the wheel, with the little girl in the back seat, heading to McDonald’s, in the town, to get a bag of carrot sticks for reindeers. Being there, he takes the opportunity to get also a cheeseburger for Santa, but his daughter reminds him that Santa also eats mince pies, so he gives up buying also the cheesebuger.

The advert ends with the hashtag #ReindeerReady.

Carrot Sticks were introduced by McDonald’s in 2005, as a change of the fast-food chain’s Happy Meals, during a
£7.4m global campaign aiming to promote healthier eating and prevent thus childhood obesity. Along with the carrot sticks, four other healthier items were then introduced, namely Chicken Grills, Wobbleicious Fruit Jelly, Robinson’s Apple Fruit Shoot, and no-added-sugar Sprite Z.