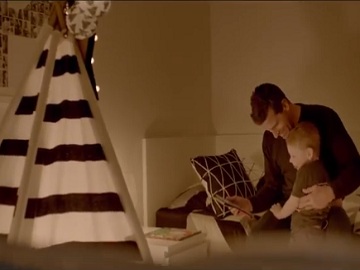 The Australian company McDonald Jones, which is the largest residential home builder in the New South Wales region, promotes its services in a new commercial that tugs at the viewers’ heartstrings.

The company, offering an extensive range of housing options to suit every need and budget, including project and architecturally designed homes, house and land packages, and ready-built homes, urges you to watch a hard working dad, who is often far from home, getting the surprise of his life.

The spot, titled “Find yourself at home”, features the man, named Shane, who’s been working far from home, living thus far from his wife and kids, while images of the latter are also shown, with his wife’s voice talking in the background about their experience and revealing that “it’s not easy having him not home”.

“Shane has been working far from home, so we brought home to him.” – it is revealed in the ad, which features a ready-built house being transported to where Shane is working. This is not all. The surprise is that his son enters the house, almost bringing tears to his eyes, and the two get to spend some quality time together.

The commercial ends with the company’s tagline, “Find yourself at home”.